.We are now looking to raise money to allow the SIYT to take the whole company to the 2017 Edinburgh Fringe festival. We have a fantastic fundraising crew, but are always open to suggestions for ways to raise this money, including taking donations as part of the overall fundraising effort
Past Fundraising Efforts

Its in June - but its the Pathfinder March!

On your bike for SIYT - Ride the Richardson Rumble

This event (on Sunday 22nd March 2015) is the season opener for many riders and gives everyone the opportunity to get that magic 100 in without the pressure of a Classic Sportive and there are 67 mile and 30 mile route options too. The route winds in way around four counties starting and finishing in St Ives, Cambridgeshire, on quiet roads without the mammoth climbs of other events.
The ride will not be timed as to take away the pressure for our newcomers to sportive events, and keep cost to a minimum.
SIYT will have a team of enthusiastic riders of all ages and there are training sessions planned each Sunday – meet 10am at the Guided Busway Car Park – until the event. Lycra isn’t compulsory but padded shorts are a must regardless of how silly they may look.
You can use this link to create your own JustGiving page and raise money for SIYT, to reach our target of £15,000 we need everyone taking part to help to raise £100. You would be making a huge difference to a great local charity. Create a page - easy for sharing with friends and colleagues by email, Facebook, Twitter or your social media weapon of choice.

Exercise is important at any time of year, but it's important to be in good shape for the onslaught of the holiday period. What better way to make sure that happens by taking part in our Santa Fun Run. For an entry fee, you a santa suit and medal to take part in trek around Grafham Water - there is a choice of a two and half mile or a nine mile circuit, walk or run. This event raised over £650 for SIYT. 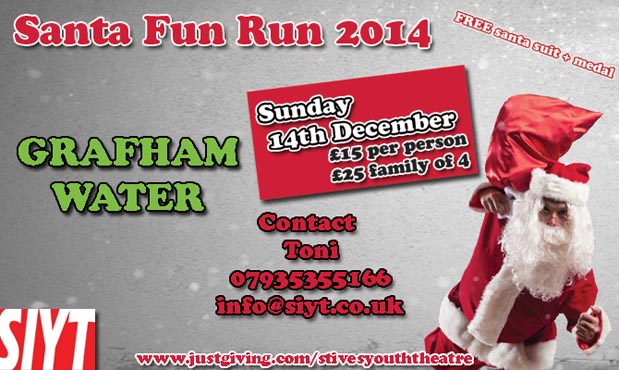